13 John Muir Quotes for the Adventurer at Heart 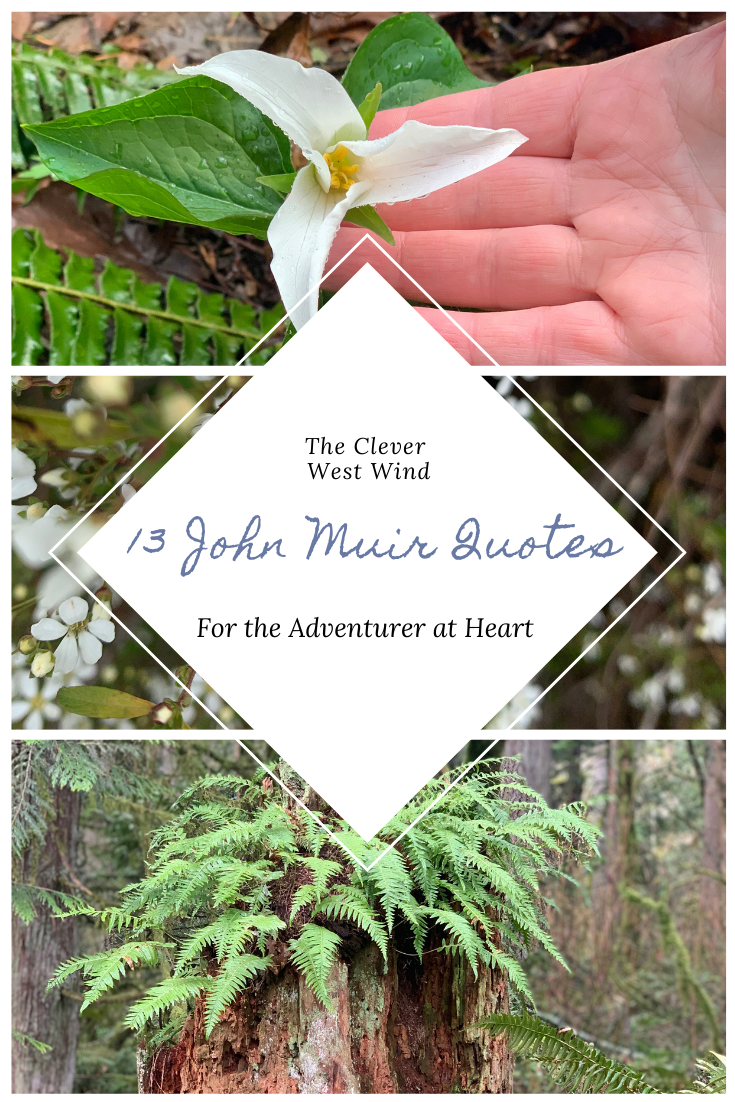 I first became aware of who John Muir was when I found myself enraptured by one of his quotes. Many great John Muir quotes are iconic. They are so simply stated, and yet, so deeply profound. And his writings tend to take on a spiritual quality towards nature, and truly speak the heart of an adventurer. But before we get into John Muir quotes, who was the guy?

Who Was John Muir?

Born April 21st, 1838 in Dunbar, Scotland, John Muir migrated to the United States with his family in 1849. Later, at the age of 29, he sustained an eye injury while working in a carriage parts shop, leaving him blind for a month. Upon regaining his vision, he turned his sight, his energy, and his life towards nature and the outdoors.

During his lifetime, he traveled to Alaska, Australia, South and Central America, Africa, Europe, China, and Japan. He also married and had two daughters, Wanda and Helen. And he held company with men like Ralph Waldo Emerson and President Theodore Roosevelt.

Then, he passed at the age of 76, in Los Angeles, California, on December 24th, 1914. He left behind him a legacy that touches us all, having written 300 articles and 12 books, founded the Sierra Club, and played a central role in creating our National Parks System. John Muir Day is now celebrated on April 21st in both Scotland and California.

Father of our National Parks

John Muir was involved in founding Yosemite, Sequoia, Mount Rainier, Petrified Forest, and Grand Canyon National Parks, and is therefore considered the father of our National Parks. So I find it rather fitting that Earth Day is just one day after his birthday. Our national parks are truly a great treasure, and one day I hope to see them all.

“Thousands of tired, nerve-shaken, over-civilized people are beginning to find out that going to the mountains is going home; that wildness is a necessity; and that mountain parks and reservations are useful not only as fountains of timber and irrigating rivers, but as fountains of life.”

If the sentiment of this John Muir quote was true during his time, it is even more so now.

TIP: If you’re also dreaming of visiting all 63 of America’s National Parks, hop on over to my friend’s blog Flannels or Flip Flops for a planning guide!

To celebrate his birthday, I’d like to highlight some of my favorite John Muir quotes. Many of them, I’m sure you’ve heard, maybe without even knowing who to attribute them to. This first quote carries so much more weight, now knowing he spent a month of his life blind.

1.“The world is big, and I want to have a good look at it before it gets dark.”

2. “The mountains are calling and I must go.”

3. “Everybody needs beauty as well as bread, places to play in and pray in, where nature may heal and give strength to body and soul.”

4. “Between every two pines is a doorway to a new world.”

6. “Climb the mountains and get their good tidings.”

7. “In every walk with nature one receives far more than he seeks.”

8. ”The clearest way into the Universe is through a forest wilderness.”

9. “Keep close to Nature’s heart… and break clear away, once in awhile, and climb a mountain or spend a week in the woods. Wash your spirit clean.”

10. ”Few places in this world are more dangerous than home. Fear not, therefore, to try the mountain passes. They will kill care, save you from deadly apathy, set you free, and call forth every faculty into vigorous, enthusiastic action.”

12. “Most people who travel look only at what they are directed to look at. Great is the power of the guidebook maker, however ignorant.”

13. “Only by going alone in silence, without baggage, can one truly get into the heart of the wilderness. All other travel is mere dust and hotels and baggage and chatter.”