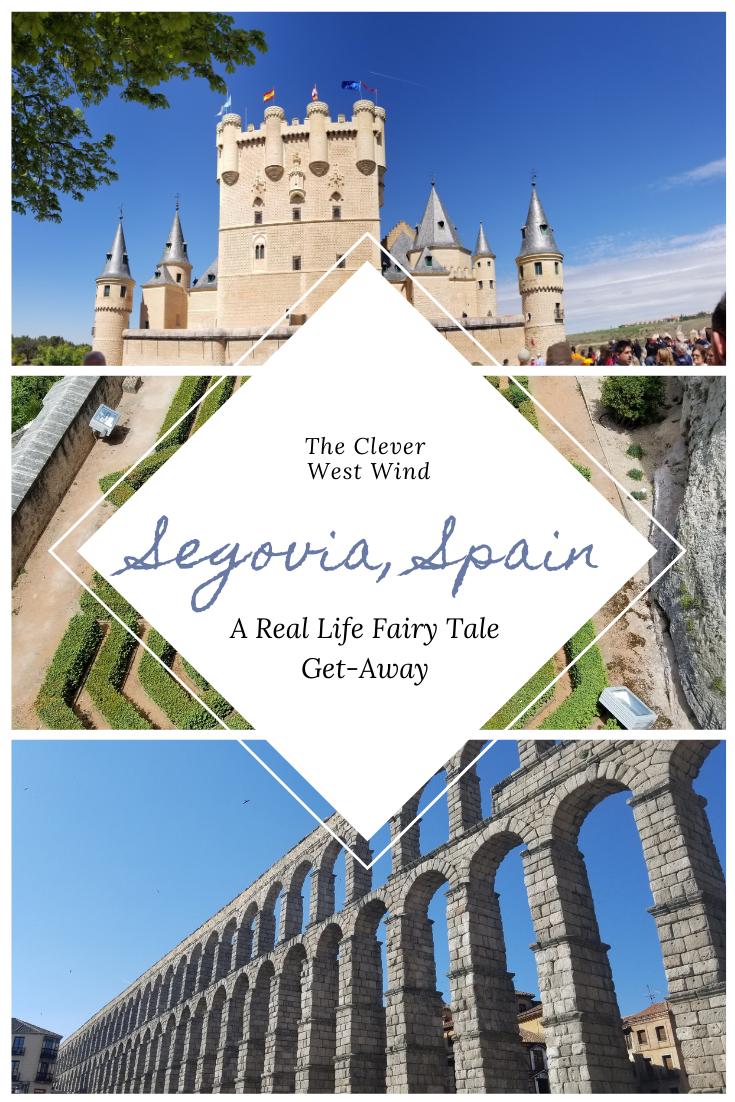 This post goes out to all the hopeless romantics and star-eyed lovers out there. For those of you brainstorming romantic get-aways, Segovia, Spain, is a perfect, real life fairy tale destination. Complete with castles and moats and knights in shining armor, you need look no further.

Let’s be real here though. As much as I may be a sappy romantic myself, fairy tale endings are a funny concept to me. Many of the original endings were anything but happily-ever-afters. And the stories that did end in some form of justice typically resulted in some pretty ruthless medieval punishments for the villains.

Take, for instance, the story of Snow White and the Seven Dwarves. In the original Grimm Brothers telling of Snow White, the evil step mother is forced to wear red-hot iron shoes and has to dance in them until she dies. Although this is a far more creative punishment than simply falling off a cliff as in more contemporary versions, it’s quite brutal! The original fairy tales are just plain dark.

However, for better or worse, most of our modern day cartoons have swapped the often gruesome and twisted medieval endings for something a bit less warped. But what do fairy tales have to do with Segovia? Keep reading to find out.

An Overview of Segovia

With a population of roughly 51,000, Segovia, Spain, lies about an hour northwest of the capital, Madrid. It is easily reached by bus or train and makes for an excellent day trip from Madrid. You can conveniently book a day trip through different bus tour agencies right from Madrid’s Plaza del Sol.

Originally a Celtic settlement, Segovia passed through Roman, Moorish, and lastly Catholic rule. Today, Segovia’s old town is a UNESCO world heritage site. Multiple landmarks are included in this designation, such as the 1st century A.D. Roman aqueduct, the last gothic style cathedral built in Spain, and the Alcázar de Segovia. Exploring the Jewish quarter, the many historical buildings, and the quaint cobbled streets of Segovia won’t disappoint.

Appropriately shaped like the bow of a ship, the Alcázar de Segovia stands on a peninsula between the Eresma and Clamores rivers. The palace includes a keep, two towers, and two courtyards, all complete with a moat and drawbridge. In our explorations, we also discovered a beautifully manicured maze-like garden.

Initially a Roman fort, the Alcázar has been reconstructed by each successive ruling culture. Rebuilt by the the Moors, and then later by the Christians, little but perhaps the foundation remains from the Roman era. Through out the centuries, it has served as a fortress, a palace, a prison, and the Royal Artillery College.

If you choose to tour the castle today, you’ll be able to explore the Armory Museum located inside. We discovered countless old cannons, weaponry, and knights in shining armor!

You can also climb to the top of the keep. To get there, we climbed a narrow, winding stair case that only allowed for one direction of traffic. But the work out and the traffic jams were well worth the view from the top!

Ok, so here’s the part you’ve been waiting for—your fairy tale connection. The Alcázar de Segovia served as inspiration for the castle in Disney’s Snow White and the Seven Dwarves. In fact, Snow White’s wishing well stands on one of the castle’s patios.

We are standing by a wishing well

Make a wish into the well

That’s all you have to do

And if you hear it echoing

Your wish will soon come true

Snow White from Disney’s Snow White and the Seven Dwarves

PRO TIP: Have a taxi driver take you to the “prettiest view in the city” for a postcard-worthy sight of the Alcázar de Segovia from below.

Segovia’s cathedral stands on Plaza Mayor, on the location where Isabella I was declared queen of Castile. Dedicated to the Virgin Mary, its construction lasted from 1525 to 1577. It was the last gothic style cathedral built in Spain, and at the time it was built, it was the tallest building in Spain.

Segovia’s Roman aqueduct stands austerely on Plaza del Azoguejo. It was built during the 1st century A.D. Today it can be found on Segovia’s coat of arms, a proud symbol of the city’s identity.

The Aqueduct of Segovia is one of the most well preserved Roman aqueducts in the world. Surprisingly, the nearly 25,000 granite blocks used to build the aqueduct are not held together by mortar, and yet it still stands today. Talk about built to last! Are you brave enough to stand underneath it?

Originally supplied by the Frio River located 11 miles outside of Segovia, the aqueduct runs partially underground. You can trace part of its underground path through the city following the brass markers imbedded in the cobblestone streets. The aqueduct reaches 93.5 feet at its tallest and contains a total of 167 arches.

We only spent a half day in Segovia, but quickly fell in love with the charming medieval town and would love to stay over night there next time. I know I’ve only scratched the surface of what Segovia has to offer here. Have you been to Segovia before? Tell me what your favorite part of this beautiful Spanish city was so I can make plans for next time!

For more ideas on day trips from Madrid, check out my post about Ávila, or watch for an upcoming post about El Escorial. You can also follow me on Pinterest for more Spain travel ideas!