15 Things to do in Barcelona, Spain 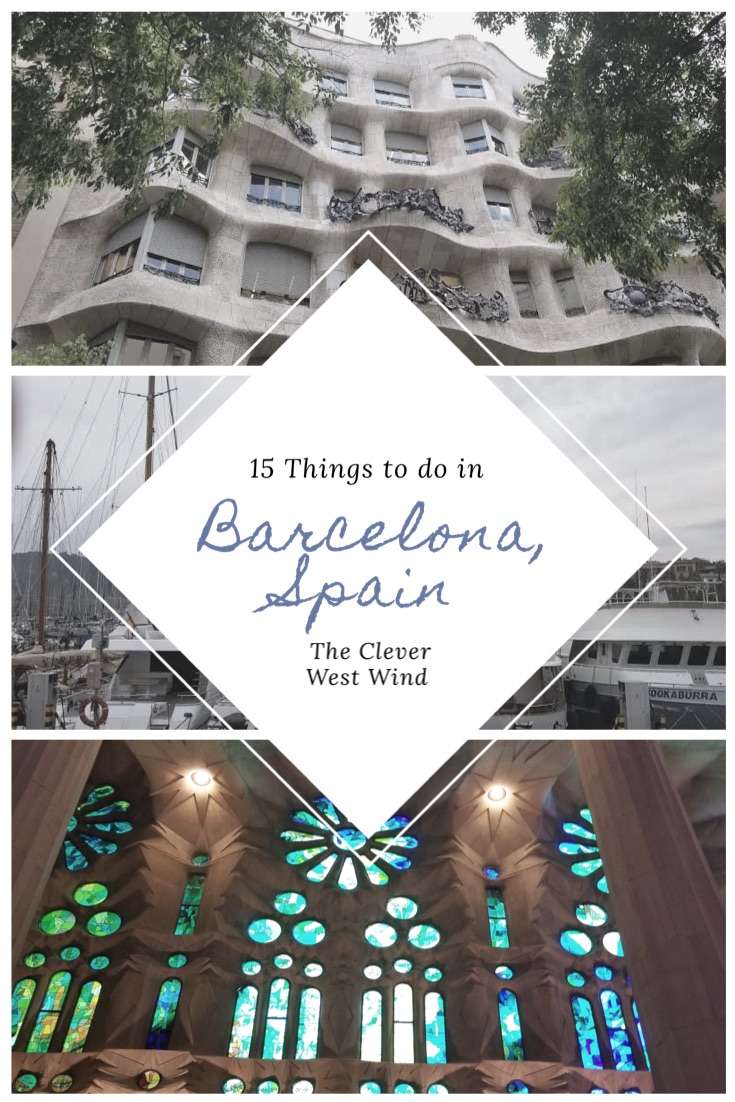 We landed in Barcelona after our long Amsterdam layover. We started and ended our Spanish adventure in Barcelona. I immediately loved the city. But at first I couldn’t tell if I actually loved the city, or if I just loved being on vacation. After seeing a little more of Spain, I can definitely tell you, I love Barcelona.

Barcelona is located in Catalonia on the eastern coast of Spain. Something to be prepared for – Catalonia has its own identity apart from Spain! First of all, their primary language is Catalán, not Spanish. And you will not find any bullfights in Catalonia.

But don’t let any of that scare you off. We were still able to get around using our Spanish, or rather, my husband’s Spanish. We found Barcelona to be a very welcoming city. It is highly wheelchair accessible, very bike friendly, and filled with motorcycles and museums.

There were a few things we knew we wanted to see in Barcelona, like La Sagrada Familia and the Picasso Museum. But there was a lot we were able to wing as well. Barcelona just has so much to offer, it was hard to decide what we wanted to do most!

So if you’re planning a trip to Spain and looking for things to do in Barcelona, here’s just a brief description of a few must-see sights you can’t pass up.

La Sagrada Familia is simply breathtaking. And a must on the list of things to do in Barcelona. To be honest, I wasn’t that impressed by what I saw in photos. La Sagrada Familia is…different. And no matter how good a photographer you may be, photos just cannot convey its beauty adequately enough. But every one who had been there raved about it. So I figured, “Sure, why not? Let’s check this place out.”

Built in the Modernista style, La Sagrada Familia has a surreal feel to it. At times I felt like I was under sea in King Triton’s palace from Disney’s Little Mermaid. Other times I felt like I was gazing up at a canopy of trees or at the cordae tendinae of some great giant’s heart. Gaudi definitely met his aim in imitating nature.

TIP: There were many things we planned spur of the moment on our trip. This wasn’t one of them. Be sure to book your tickets in advance, as they sell out quickly!

The Cathedral of Barcelona, built in the Gothic style, is worlds different from La Sagrada Familia. If you choose to pay for the tower access <which I highly recommend>, an elevator takes you up to the roof top for a stunning view. You can see all the way out to the ocean on a clear day. For those of you who are worried about accessibility, once you get to the roof top, there are a few steps to navigate.

TIP: The cathedral entry lines were much shorter in the afternoon. Instead of waiting in long lines in the morning, hop on over to the Gaudi Exhibition next door first.

The Gaudi Exhibition stands right next to the Cathedral of Barcelona in the Gothic quarter. We spent maybe an hour and a half here as an audio guide led us through the museum. We learned about Antoni Gaudi’s life, inspirations, and innovations in his architecture.

TIP: If you’re able to, I would visit the Gaudi Museum before visiting La Sagrada Familia, Park Guell, or Casa Mila. You’ll have a much deeper appreciation and understanding of his work.

Park Güell sits on a hill overlooking the city of Barcelona. Designed by Gaudi, it was originally intended to be an upscale, exclusive neighborhood, but was never completed. Park Guell is actually quite large. There are two sections – one with free entry, the other with paid entry.

TIP: If you want to see the iconic Gaudi lizard at Park Guell, that requires paid entry. Booking tickets ahead is a must.

I know nothing about art, but I do enjoy it…sometimes. I expected the Picasso Museum to be a bunch of modern expressionist work that I would not be able to understand. However, I was quite pleasantly surprised. We got to see a wide range of Picasso’s work over his lifetime, including pieces from his Blue Period and a study of Velasquez’ Las Meninas. Quite honestly, I did not realize what a wide range of skills Picasso possessed. It gave me a far better appreciation and respect for Picasso’s work. I suppose you have to understand the rules of an art to be able to break them, right?

I am of the strong opinion that chocolate should be the sixth food group. So it should come as no surprise to you that I dragged my husband to the Chocolate Museum. I had heard that Barcelona was known for its chocolate, but I didn’t know why until we visited the museum.

The Chocolate Museum is a bit small <an hour was plenty of time>, and it isn’t overly flashy or high tech. Unbelievable chocolate sculptures stood on display in one room. In another room, displays depicted the history of chocolate and chocolate production. Did I mention your entry tickets are actual chocolate bars?!

While we’re on the topic of chocolate, you cannot pass up the churros con chocolate in Barcelona! It’s the best you’ll find anywhere. Just be aware, the hot chocolate is more for dipping than for drinking. It is dark, thick, and strong!

The Passeig de Gràcia, or passage of grace, is an avenue in the Eixample district of Barcelona. You can visit several beautiful buildings from the Modernista architectural movement here, including Casa Batllo and Gaudi’s Casa Milà, or “La Pedrera”. For an entrance fee, you can take a roof top tour of many of these beautiful buildings. Or you can also just enjoy them from the street.

La Rambla is a thoroughfare bustling with pedestrian and tourist traffic, shops, and restaurants, from morning to late at night. You’ll probably catch a street performer or two, but don’t be surprised if they run at the first sight of law enforcement! You can also follow La Rambla all the way to the beach.

The Columbus Column stands at the end of La Rambla, just before the beach. There’s a small museum or exhibit inside at the bottom of the monument. There’s also an observation deck you can visit at the top, but it was unfortunately closed for maintenance the day we visited.

We wandered into San Felipe Cathedral while aimlessly exploring the city one night. Although not as impressive as the Cathedral of Barcelona, it had its own charms. Not a big tourist attraction, the atmosphere was more peaceful. Entrance was free, and they were hosting a concert the following night I wish we could have made. I would not call this a must-see, but just know there are other cathedrals in the city that are fun to explore and much less touristy.

One of our hotels was in the Barri Gotic. It was amazing – we were just a thirty second walk from the Barcelona Cathedral. The narrow, twisting, intimate streets of Barri Gotic hide secret courtyards and beautiful architecture that’s fun to explore.

This is where you’ll find the Cathedral of Barcelona, Carrer del Bisbe Bridge (pictured above), and ancient Roman towers that mark where a gated entrance to the city once stood. In Placa Nova there’s a fun sculpture that spells out “Barcelona” in geometric shapes which makes for a fun photo op.

The Hop on Hop Off bus tour was a convenient form of transportation and nice way to see more of the city. We used it to see the Eixample neighborhood, and to stop in at Park Guell for a short visit. You can also use the Hop on Hop off bus tours to get to La Sagrada Familia and Camp Nou, Barcelona’s soccer stadium.

We did the hop-on hop-off bus tour on one of our last days in Barcelona. But I would highly recommend doing it towards the beginning of your stay and here’s why: we received a coupon book with our bus tickets. The book included discounts for many noteworthy sites around Barcelona, such as the Gaudi Exhibition, several of the Modernista buildings, and the Columbus Column. Plus, the buses have free WiFi! Which helped in planning our next move.

TIP: Barcelona has two different companies that run the hop-on hop-off bus tours. Their bus stops will be marked with a sign matching their brand – do not confuse these bus stops with each other or with the city bus stops.

What We Want to Do Next Time

We have three main things on our agenda for our next visit to Barcelona. First, I hope to plan our next visit after La Sagrada Familia is completed, sometime after 2026. Second, we plan to check out Camp Nou. Camp Nou is Spain and Europe’s largest soccer stadium, plus there’s a museum and tour you can check out there! Lastly, I hope to visit more of Barcelona’s 55 museums on my next visit.

For more vacation ideas, check out my post about a long Amsterdam layover.

4 thoughts on “15 Things to do in Barcelona, Spain”