What to do during a long Amsterdam Layover 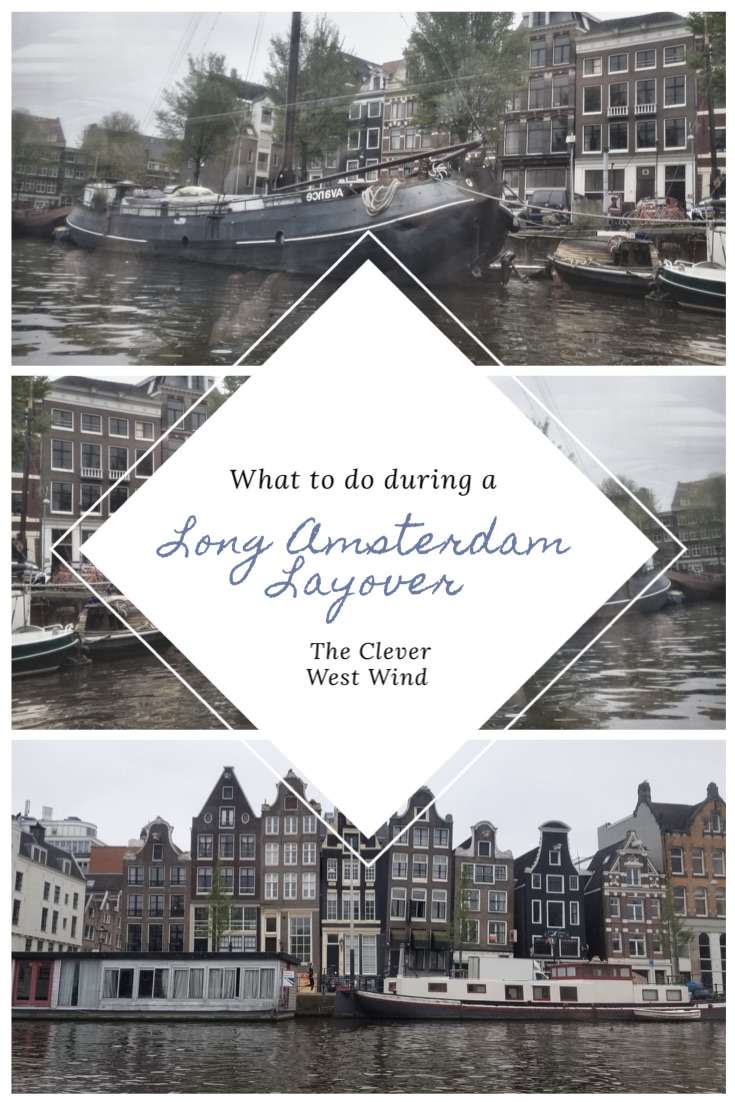 Don’t waste your Amsterdam Layover at the Airport!

Yes, you have enough time to see a few sights on your long Amsterdam layover. And yes, it is so worth the venture. That’s the short answer to my two most burning questions I had while researching in preparation of our trip. Now lets get down to details.

We landed in Amsterdam in the tail end of April and it was still quite cool outside. <I was glad to have my jacket, especially while on the canal boat tour.> My husband and I had about an 8 to 9 hour layover in Amsterdam, and we had decided to venture away from the airport and see a bit of the city before continuing on to Spain.

Travel time from the Amsterdam airport to the city center was only about 15 minutes by subway. We hadn’t really looked up directions prior to arrival, but the signage directing us to the subway was fairly easy to follow.

I had hoped to squeeze in more than we actually did on our Amsterdam layover. But truth be told, we didn’t want to stray too far and miss our connecting flight. Plus, I had prepared little for Amsterdam and focused most of my planning energy on Spain. Unfortunately, we were a little indecisive about what to do in Amsterdam. The two main things we did do were a canal boat tour and the Red Light Secrets Museum self-guided tour.

What is was, and what it wasn’t

We took an Amsterdam canal boat tour which included an audio guide available in several languages. I somehow expected the boat to be more intimate and personal, or at least have more character. Perhaps I was naively imagining something more akin to a gondola ride in Italy.

But the boats were big, crowded, commercial, and as expected, touristy. We boarded the boats in hordes. And although we had the audio guide, our boat conductor gave us a bit of his own version of the tour over microphone. I would have enjoyed either version of the tour. But trying to listen to both the boat conductor and the audio guide at the same time just meant I missed large chunks of information from both sources. Despite all that, we did learn a lot of interesting facts about Amsterdam.

My favorite sight along the canal boat tour was by far the dancing houses, named for their off-kilter appearance <pictured above>. I found the city’s architecture and its history so fascinating. For example, at the time many of these houses were built, taxes were based on the width of the property, not the total area a house occupied. As a result, the houses were built narrow.

And narrow buildings outside meant narrow stair cases inside. The narrow stair cases made it very difficult to move large furniture to the second or third floors. The solution? Large hooks were installed along the buildings’ gables with a pulley system to hoist large furniture high over head. <You might be able to make out some of these hooks on the “dancing buildings” in the photo above.> It suddenly gave me so much context to the countless cartoons from my childhood of people being squashed by pianos falling from the sky. You can’t un-see it now, can you?

Another interesting tid-bit we learned on the canal boat tour was about an Amsterdam architecture optical illusion. Notice how the windows become shorter as your eyes scan up each story of the buildings. If you were standing on the street at the bottom of one of these houses, it would give the illusion that the buildings are taller than they actually are. An illusion of grandeur.

All in all, I would say the canal boat tour is a must, whether you’re in Amsterdam for a day or a week. It was definitely the perfect way to get a small taste of Amsterdam on our long layover.

We visited the Red Light Secrets Museum of Prostitution just before our canal boat tour. We were told it was nearby, wouldn’t have a long wait, and it was only about 10E to add it onto our canal boat tour tickets. So we figured, sure. Why not?

And they were right. The museum was only about a ten or fifteen minute walk from the main train station. We passed by some of the famous red light windows on our way there. A little bit shy, I didn’t really look at any of women standing in the windows as we walked by.

When we got to the museum, we found it to be fairly small, not very crowded, and self-guided. We wound our way through the staircases and narrow passages of an old house (not ADA accessible). We read statistics and saw example rooms of what some of these women’s working conditions might be like. The tour ended in the gift shop where you can purchase anything from benign magnets to more explicit souvenirs.

On our visit there, I learned just how different the US’s culture and attitudes regarding sex are. The museum presents prostitution in a very neutral, maybe even slightly positive light, while highlighting some of the advantages, dangers and difficulties of prostitution as a legal profession.

The women in this profession have a few requests, though. Please don’t take photographs or videos of the women in the windows. And please don’t loiter and stare. Price haggling is not an option. Show these women the same courtesy you would anyone else.

As we left the museum, I didn’t stare. But I also wasn’t awkwardly avoiding eye contact like dancing around the elephant in the street, either. Overall, the museum was interesting and very informative about one of Amsterdam’s most well known curiosities. Although I wouldn’t call it a must-see, if you’ve got an hour or two to kill, it’s an option.

Hours: Daily from 10am to Midnight

Back to the Airport

After the canal boat tour and the Red Light District Museum, it was time to eat. We wanted something authentic, but not waffles. Funny enough, the majority of the restaurants we found in our vicinity were foreign cuisine, not local! Go figure.

So in our indecision, we headed back to the airport maybe a bit earlier than we needed to. <Security wasn’t bad at all.> And we ate dinner at the airport instead. Sad, I know, but we did at least get to try a stroopwafel at the airport! Besides, we were exhausted, ready to sit, and we couldn’t wait to fly into Barcelona. But that’s a conversation for next time!

On our Next Visit to Amsterdam

Amsterdam had never previously interested me very much until our Amsterdam layover. That’s probably because I knew next to nothing about the city. Now I’m dying for a repeat visit though, and my husband and I already have an Amsterdam Bucketlist started.

One building that I had really hoped to see, and have to see on my next visit to Amsterdam is the narrowest house in Amsterdam, AKA the “Smallest House of Europe!” Located in the old city center, it measures just 6’8” wide!

Other than impossibly narrow houses, our Amsterdam Bucketlist includes the Anne Frank House, the Rembrandt Museum, and the Torture Museum. Most of these museums we intentionally decided not to visit during our layover, as we had heard the lines at these locations can be quite long, and we were concerned about time. But the next time we’re in Amsterdam, we hope to be there for more than just a layover!

So tell me, what did you do on your long Amsterdam layover? And what’s the shortest layover you’ve had while venturing out into the city? <Just wondering how close I can push the limit next layover, wink wink>

And don’t forget to find out how our adventures continue in Barcelona, Spain! Until then, goede reis!

5 thoughts on “What to do during a long Amsterdam Layover”