Who the Heck was Antoni Gaudí and Why Do We Care? 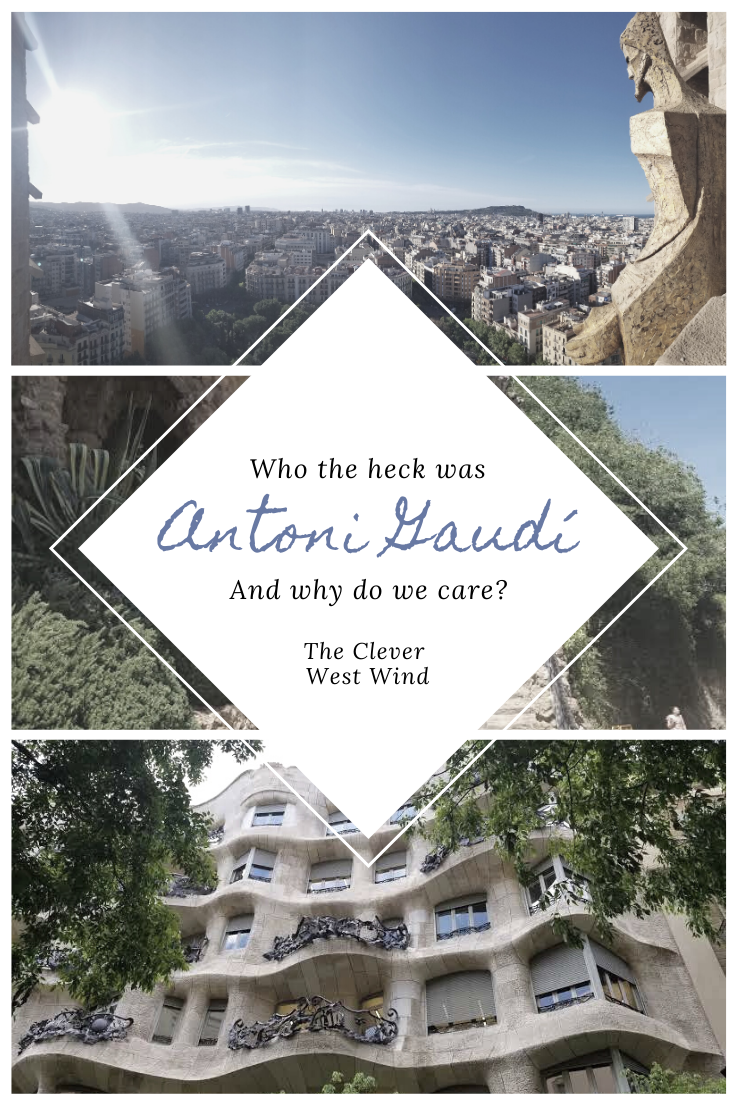 First of all, who was Antoni Gaudí?

Everyone who had been to Spain told me I had to go check out the work of Antoni Gaudí. But I wasn’t at all familiar with Gaudi or his work. So I started looking at endless pictures and blog posts.

But in our digital age where so much is immediately available at the swipe of a screen, I wasn’t all that impressed from what I saw in photos. And a picture can only convey so much. So that is what leads us to this post. Who the heck was Antoni Gaudí and why do we care?

Antoni Gaudí was born in 1852. He was sick a lot. And because he was always so sick and frail, he wasn’t allowed a normal childhood, playing and rough housing and participating in sports like normal boys. I guess all great artists have got to have a little bit of crazy tucked away somewhere. There’s his.

So instead of the normal boyhood activities, Gaudí observed things. He observed the world and nature around him, and he drew what he saw. Nature and God were two great inspirations reflected in all of his work, and it redefined architecture as we knew it. And then Gaudi died in June 1926, just shy of his 74th birthday.

Being there in Spain to see some of Gaudí’s work in person, I was converted. But before you go check out his work yourself, check out the Gaudí Exhibition.

The Gaudí Exhibition Center at the Museu Diocesa de Barcelona

I would make it a priority to stop by the Gaudí Exhibition first. The Gaudí Exhibition stands right next to the Cathedral of Barcelona in the Gothic quarter, or Barri Gotic. We spent maybe an hour and a half there as an audio guide led us through the museum.

We climbed up and down stairs to different exhibits, although there was an elevator if needed. There we learned about Gaudi’s life, inspirations, and innovations in his architecture. There were 3-D models providing an example of his work process, and short films.

The route through the museum ended in the gift shop with fun, bright souvenirs just waiting to go home with you. Ok, now that you’ve checked out the museum, let’s get on to the meat of the topic: Why we care about Gaudí and why you can’t miss his work while you’re in Barcelona.

Here are 3 big reasons why we care about Antoni Gaudí

Gaudí took over the construction and design of La Sagrada Familia in 1883 from Fransisco de Paula del Villar. Construction had just barely begun the year prior in 1882. I was amazed to learn that La Sagrada Familia was built so recently. I was under the impression that we were far beyond the age of constructing massive and beautiful cathedrals or other pieces of architecture such as this.

Built in the Modernista style, La Sagrada Familia has a surreal feel to it. Like the logic of a dream, Gaudí followed his own rules. At times I felt like the sunlight filtering through the stained glass windows played upon the rippled ceiling like reflections on water. Other times I felt like I was gazing up at a canopy of trees or at the cordae tendinae of some great giant’s heart. Gaudí definitely met his aim in imitating nature.

A Few Things You Should Know Before You Go

1. Book tickets ahead of time. Booking tickets is a must – you may not get in otherwise.

4. Show up early. I cannot stress this one enough! If you book your tower tickets close to sunset, I would be sure to show up early for extra time to view the rest of the cathedral. The cathedral closes to the public not long after the last tower tour is offered. I would plan on spending at least a couple hours here. Trust me, you’ll want the time.

Park Güell sits on a hill overlooking the city of Barcelona. Designed by Gaudí, it was originally intended to be an upscale, exclusive neighborhood, but was never completed or used for its intended purpose. Construction lasted from 1900 to 1914, at which time construction was interrupted by World War I. Park Güell first opened as a public park in 1926.

I was surprised to discover that Park Güell is quite large. There are two sections – one with free entry, the other with paid entry. Of course, the part you pay entry for is the part that’s most well known from postcards and pictures. For example, the iconic Gaudi lizard is located in the paid-entry section of Park Guell. And again, if you are planning on visiting the paid-entry section of the park, be sure you book tickets at least a few days in advance.

Casa Milà, or “La Pedrera,” is located in the Passeig de Gracie, or “passage of grace,” which is an avenue in the Eixample district of Barcelona. Another design by Antoni Gaudi, it’s construction lasted from 1906 to 1912. It was built to be the private residence of Pere Mila (hence it’s name) and his wife Roser Segimon.

Casa Mila was nicknamed “La Pedrera” by the people Barcelona, which means the rock quarry. The building reminded the people of a pile of rocks. I suppose I can see that. But my initial impression of Casa Milà was that its undulating form belonged under sea in Disney’s Little Mermaid, perfect for a city near the ocean. It wasn’t until after Antoni Gaudi’s death that Barcelona started to love La Pedrera and feel proud to claim it as an icon of their city.

I hope this clears up your questions about who Antoni Gaudi was and why he’s such a big deal. I would love to hear your own impressions of Gaudi’s work. What does his work make you think of? And what was your favorite of his constructions and designs to visit and why?